Born of the ancient yoga tradition, the chakras are now an alternative source of energy for a new age. But what are they? Where did they come from? And how are they useful to us today?


Chakra is a Sanskrit (ancient Indian language) word, meaning wheel or vortex. Chakras are energy centers that exist in the physical body. They function as valves directing the flow of energy through our system.

Chakras are not physical, but rather aspects of our consciousness. There are seven major chakras within our body, arranged vertically from the base of the spine to the top of the head. They are the base or root chakra, sacral chakra, solar plexus chakra, heart chakra, throat chakra, brow chakra or the third eye and crown chakra.

Each energy center represents an emotion or psychological states such as power, love, and imagination, and each is linked to a color. Using colored gemstones or crystals helps to strengthen the association with the state you may be seeking. For instance, red crystals, associated with the first chakra with grounding as one of its goals, may help you to feel more stable and connected to earth and the material world. There are many other correspondences, which help us to understand the essential nature of each chakra, and enable us to work on chakra balancing to unify our entire being— body, mind, spirit, soul.


The chakra system originated in India and is linked to the ancient yoga masters. The origin of yoga and the chakras go back to the Vedas, the oldest written Indian texts. In the 7th century, the chakras became an integral part of yoga philosophy.

Yoga philosophy maintains that there are thousands of chakras throughout the body, but seven of them are of major importance. All seven chakras occur in Sushumna Nadi, the Shining Pathway that begins from the crown of the head, down through the base of the spine.

At the base of the spine is Kundalini (root chakra). Kundalini is the “mysterious power within.” Ancient yoga philosophy holds that by that living our lives engaged in the process of self-discovery, we awaken Kundalini and activate its upward flow through Sushumna Nadi, leading to an awakening of individual potential and complete enlightenment. 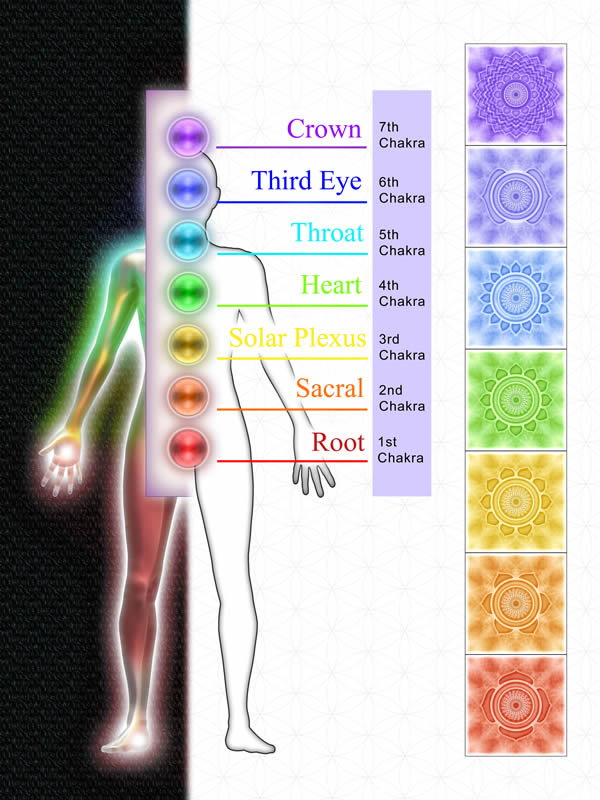 CROWN CHAKRA - VIOLET - Enlightenment Chakra Seven relates to divine guidance, free will and unity with the greater world beyond. When balanced, this chakra brings enlightenment, spiritual connection, and bliss.

THROAT CHAKRA - BLUE - Creativity
Chakra Five is related to communication, voice, rhythm, and harmony. Tuning in to this energy center enables one to communicate clearly and fluidly, and to express oneself creatively,

HEART CHAKRA - GREEN - Compassion
Chakra Four is associated with love, forgiveness, and compassion. A healthy Heart Chakra allows us to feel deep emotions, possess hope, and live peacefully with those around us.

SACRAL CHAKRA - ORANGE - Sensuality
Chakra Two is connected to sexuality and our emotions. To realign this chakra is to restore a depth of feeling, harmony in relationships, and an openness to exploration.

ROOT CHAKRA - RED - Stability
Chakra One represents our connection to the natural earth and the physical world. Opening this chakra will bring one a sense of grounding, stability, courage, and patience.